Lava Lake is exactly what you think it is when you hear the phrase “Lava Lake”. It’s a pool of lava that remains in a lava form for a long time. Normally when a volcano erupts, patches of lava deposits may be created in the neighborhood of the crater, but these patches cool down exposed to the air and turn from liquid form into solid. Lava Lakes are different as lava remains liquefied and “alive” within its lake but many tricky a condition need to be met to ensure such continuous flow and supply of magma which makes the existence of lava lake extremely rare. Right now there are as few as five only active lava lakes in the world. Erta Ale Lava Lake is the most significant as it is the longest lasting lava lake in existence. For your information, the list of all active lava lakes along with locations is below: 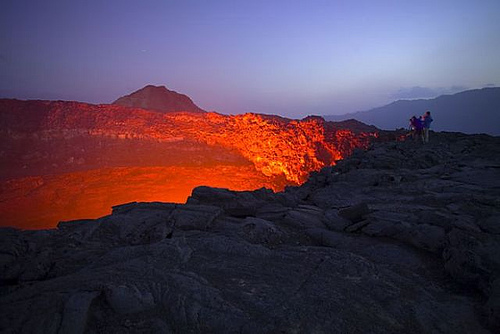 As its name suggests, Erta Ale Lava Lake is located at the summit of Erta Ale Volcano (<--click on the link to get to information on Erta Ale facts, location and safety information of Ethiopia) in the Danakil Depression (also known as Afar Depression) in Ethiopia. By looking at the pictures, Erta Ale Lava Lake may somewhat remind you of Darvaza Door to Hell. While the two are in no way related, there is no surprise local Afar people refer to it as the Gateway to Hell. The main difference would be that Erta Ale Lava Lake is an entirely natural phenomenon, whereas Darvaza only exists because of intervention by humans (digging and then setting it on fire).

Scientists estimate that Erta Ale Lava Lake has been active since 1906 which make is hands down the longest active lava lake in the world. When visiting Erta Ale Lava Lake at night, you may be able to see the glowing light shining out towards the sky from the pit which offers breathtaking opportunities for photography. Some adventure travel agencies offer tours to Erta Ale which include camping at the summit of the volcano, right by the lava lake itself. That must truly be an unforgettable experience and surely one worth every penny (albeit those tours are not cheap by any means). The tricky part is the overall safety of Afar region which happens to be close to the border with Somalia (no good), plus the presence of Afar warrior tribes with proven track record of hostility towards foreigners.

Check out the video of Erta Ale Lava Lake filmed during an expedition to this rugged region. The video contains nice footage of bubbling hot lava as it occasionally overflows from its crater pit bed and erupts in a wavy motion.

If potential safety issues are of no concern to you and you are willing to take your chances nevertheless, you will be rewarded with an experience from one of the least accessible places on Earth. There are no roads leading to Erta Ale and the temperatures continuously rank as some of the hottest on Earth. The region is also world’s driest and lowest, with parts of it placed more than 100 meters below sea level. Welcome to Erta Ale Lava Lake in Ethiopia. Not many tourists make it here.